By Marita Vandenberg published on 05 November 2018

The Department of Internal Affairs (DIA) team at the Service Innovation Lab (the Lab) were extremely successful in this year’s New Zealand Open Source Awards, walking away with the Award for Open Source Use in Government. 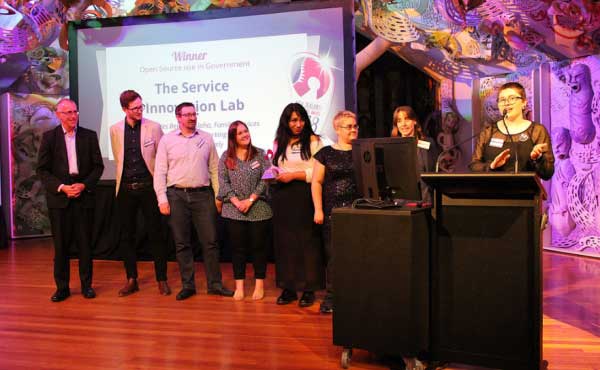 Focusing on social and scientific benefits, the Awards recognise and celebrate contribution and advocacy for free and open source software – software made freely available for others to re-use.

The Service Innovation Lab collaborates with other agencies to identify new ways of working that will lead to New Zealanders having better and more joined-up experiences with government services. The Service Innovation team won their award for their multi-agency work on Rates Rebates, the Family Services Directory API (Application Programming Interface) and for working openly and collaboratively.

The latter – working openly and collaboratively – is the most important aspect of the win. Open and collaborative is the Lab’s fundamental approach and it underpins why the Rates Rebate and Family Services Directory API was able to be successfully developed.

People who own and are living in their own home and are eligible, currently have to apply for a Rates Rebate using a physical form. The aim was to move away from the standard paper-based experience, and explore other ways of delivering this service. After researching a number of options, and working closely alongside DIA, which administers and manages the Rates Rebates, Tauranga Council trialed the more modern, accessible online application process that was developed.

This new method significantly reduces time and effort for citizens. (There will be a blog in the near future reporting on Rates Rebate.)

As well as making the software they developed freely available, the project team also regularly shared progress updates and learnings through blog posts - an added bonus.

The Lab’s Technology Lead, Brenda Wallace, also won the Open Source People’s Choice award for her work with Whare Hauora, developing sensors that can tell you when your home is healthy and when it is making you sick.  Not only that, but she also won an Open Source special award in recognition of the breadth and depth of her community commitment and open source contributions.

“I am incredibly proud of the team for the work they did supporting DIA, Tauranga Council and other local authorities to develop and test an easier way for people to apply for their Rates Rebates,” says Darryl Carpenter, Manager Integrated Services and the Service Innovation Programme, “as well as the open, collaborative approach we followed to achieve that.”